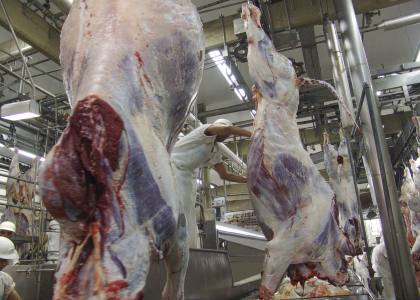 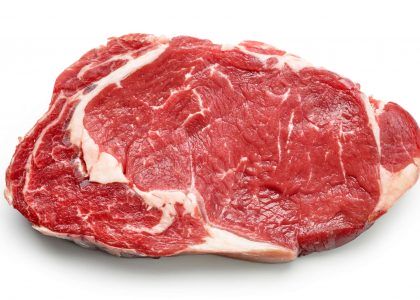 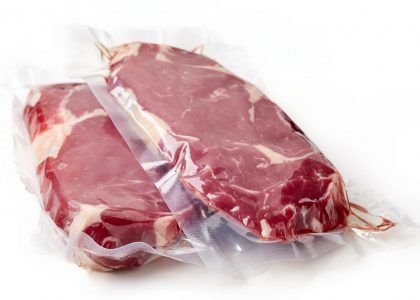 “the meat of a slaughtered bull, steer, heifer, cow, or other adult bovine animal”

Age
These animals may be sold to be slaughtered as young as 1.5 to 2.5 years old (bull, steer, heifer) and over 3 years old (cow).

Colour
When the quality of beef is to be determined, the amount, quality, and colour of the flesh, bone, and fat must be considered. The surface of a freshly cut piece of beef should be bright red in colour. When it is exposed to the air for some time, the action of the air on the blood causes it to become darker, but even this colour should be a good clear red. Any unusual colour is looked on with suspicion by a person who understands the requirements of good meat.

Cutting
To obtain beef of the best quality, it should be cut crosswise of the fibre. In fact, the way in which meat is cut determines to a great extent the difference between tender and tough meat and, consequently, the price that is charged. This difference can be readily seen by examining the surface of a cut. It will be noted that the tender parts are made up of short fibres that are cut directly across at right angles with the surface of the meat, while the tougher parts contain long fibres that run either slanting or almost parallel to the surface.

Yield
The amount of bone and cartilage in proportion to meat in a cut of beef usually makes a difference in price and determines the usefulness of the piece for cooking. Therefore, these are matters that should be carefully considered. For instance, a certain cut of beef that is suitable for a roast may cost a few cents less than another cut, but if its proportion of bone to meat is greater than in the more expensive piece, nothing is gained by purchasing it.

Bones
Bones, however, possess some value and can be utilized in various ways. Those containing marrow, which is the soft tissue found in the cavities of bones and composed largely of fat, are more valuable for soup making and for stews and gravies than are solid bones.

Fat
In young beef in good condition, the fat is creamy white in colour. However, as the animal grows older, the colour grows darker until it becomes a deep yellow.

Quality
Besides the meat, bone, and fat, the general shape and thickness of a piece of beef should be noted when its quality is to be determined. In addition, its adaptability to the purpose for which it is selected and the method of cookery to be used in its preparation are also points that should not be overlooked.

Naming
With the general characteristics of beef well in mind, you should be  prepared, to learn of the way in which the animal is cut to produce the different pieces and the names that are given to the various cuts. The cutting of the animal, as well as the naming of the pieces, varies in different countries, but the difference is not sufficient to be confusing.

More Precious
An important point for to remember concerning meat of any kind is that the cheaper cuts are found near the neck, legs, and shins, and that the pieces increase in price as they go toward the back.

Deboning Scheme
The general method of cutting up a whole beef carcass into large cuts is as follows. After the head, feet, and intestines are removed, the carcass is cut down along the spine and divided into halves. Each half includes an entire side and is known as a side of beef. Then each side is divided into fore and hind quarters along the diagonal line that occurs about midway between the front and the back. It is in this form that the butcher usually receives the beef. He first separates it into the large pieces and then cuts these pieces into numerous smaller ones having names that indicate their location.